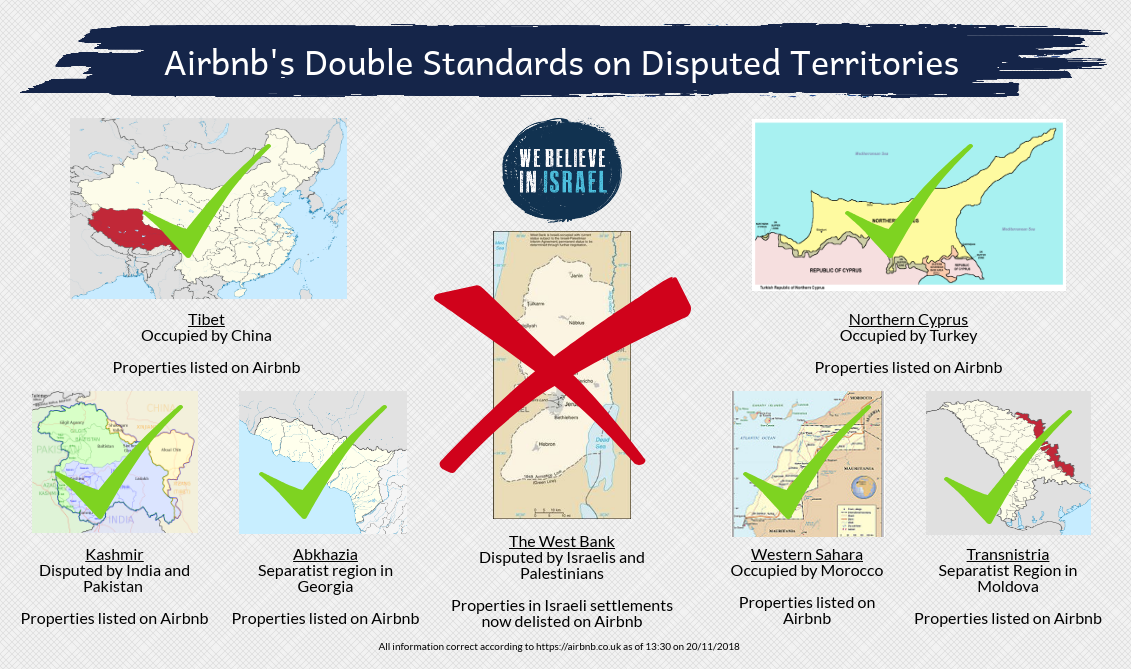 According to Alan Dershowitz, in the 1920s, Harvard University president A. Lawrence Lowell attempted to place a limit on the number of Jews admitted to Harvard, on the grounds that “Jews cheat”. When it was pointed out that non-Jews also cheat, Lowell retorted “you’re changing the subject. I’m talking about Jews".

This is the essence of the double standards so routinely and insidiously applied to Israel and its position in the world. It was on display again in Airbnb’s recent announcement that it was delisting properties in Israeli settlements in the West Bank.

It would be wrong to assume malice. Airbnb make clear that there was significant deliberation over the issue – writing “We know that people will disagree with this decision… There are many strong views as it relates to lands that have been the subject of historic and intense disputes between Israelis and Palestinians in the West Bank. Airbnb has deep respect for these views”.

Nevertheless, malice or no malice, the double standard is painfully clear. Airbnb, as We Believe in Israel’s infographic lays out, lists properties in disputed territories across the world. If you fancy seeing the natural beauty of (disputed) Kashmir, you can stay in an Airbnb. Want to hike in the Himalayas in (disputed) Tibet? Stay in an Airbnb. How about a holiday on the Black Sea in (separatist) Abkhazia? Stay in an Airbnb. Maybe you fancy exploring the Saharan desert in (occupied) Western Sahara? Stay in (you guessed it) an Airbnb.

Settlements are an undeniably tricky issue; even on the pro-Israel side, there will be those sympathetic to Airbnb’s move. The problem lies in this double standard – the temptation to simply say, as the Harvard president said , “you’re changing the subject. I’m talking about the Jews”, or in this case the West Bank and the settlements.

It is entirely legitimate, if possibly unwise, for Airbnb to implement a policy according to which properties in disputed territories are not listed in its directory. This isn’t what happened. Instead, Israel has been deliberately targeted by Airbnb.

This makes Airbnb’s decision – whether intentional or not – a political statement on the Israeli-Palestinian conflict, when they themselves acknowledge “We are most certainly not the experts when it comes to the historical disputes in this region”.

Airbnb would do well to heed its own words; apply this policy across all disputed territories, or do not apply it at all.